The implied expectation of the term “medical marijuana” is that a physician can write a prescription like any other prescription; one with a drug name, a precise dosage, a frequency, a mode of administration, and a quantity for a stated duration. For example, “Penicillin, 250 mg. tablets, take three times a day for 10 days”. Fat chance when it comes to a prescription for marijuana. There are over a hundred different types and strengths of marijuana (cannabis) and each marijuana product itself contains at least 460 active chemicals. The breeding efforts and expertise that has gone into producing “a better marijuana” is impressive. Anyone that protests “genetically engineered” tomatoes or oranges should not be smoking marijuana. Prescribing cannabinoids, a single active chemical often referred to as “synthetic marijuana”, in tablet or capsule form has been used as medical marijuana by oncology  and pain management centers for years.  “It just ain’t the same” according to marijuana advocates, and some research suggests that with 460 active chemicals in marijuana they may be right. 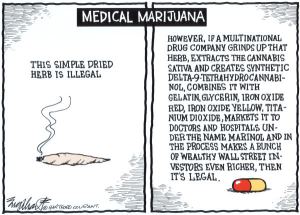 The Massachusetts Department of Health has just issued 52 pages of regulations for dispensing medical marijuana. They will require a prescription to have a maximum amount that is expected to be sufficient for 60 days, defined as 10 oz. Ten ounces is about 284 grams and a “blunt” is about 1 gram, so that would be about 4 “blunts” a day for 60 days. Prescriptions can be written for patients over 18 yrs. with a “debilitating medical condition” (7 are specifically named plus “others”) or a “life-limiting illnesses” (expected death in 2 years). Patients under 18 yr. may get a prescription for the same reasons as agreed to by two physicians, one of whom is a pediatrician. Independent labs will be responsible for testing the product for contamination, usually a variety of heavy metals. The strength of the dispensed product and the degree of its effects will be variable.

So, what is so bad about marijuana? Use of marijuana (MJ) can acutely slow reflex time, impair motor coordination, and alter perceptions, similar to alcohol. Of course, these functions are all important for safe driving. There are more permanent and potentially more significant effects of heavy use of marijuana in adolescents.

According to recent research MJ is really not so bad for you if you are over 20 years old. Using the new techniques of functional MRI (fMRI) by which brain function as well as structure can be measured, it has been shown that contrary to previous thought, the frontal lobe is still undergoing maturation up to the age of 20.  Maturation of the brain as measured by the increase of white matter, the “tissue of connections” between all the components of the brain, is retarded by heavy (daily) use of MJ, especially in “early users” (start at age 13). The old TV spot of “This is your brain, and this is your brain on drugs” using the frying egg image may be correct for MJ use by those under 20. Adolescents in general tend to be impulsive and have some difficulty in judging the long-term consequences of present actions, and these are functions of the frontal lobe.

Unlike tobacco use that can be measured easily  in terms of number of cigarettes smoked per day and alcohol use that can be measured in ounces drunk per day or per hour, the variety of MJ product’s strength is so diverse that “daily use” is the only reliable marker for heavy users of MJ. Unlike tobacco and alcohol, heavy use of marijuana can NOT kill you. Lester Grinspoon, MD years ago called marijuana “the safest drug in the world”  since it is impossible to commit suicide with it. It is rare to hear about an accidental “marijuana overdose”.

The three drugs of adolescent choice today, tobacco, alcohol, and marijuana, do share a common denominator in that those who use one of the three drugs by age 13, will use one or more of the others before 18 yr. There is no evidence that one is the “gateway” to another. In fact, one research remarked that the concept of a gateway is more of a myth than a reality. He called development of addiction to one or the other substance as a “shared vulnerability”.

By their senior year in high school 36% in one survey had tried MJ. There is no way of predicting which of those could eventually become heavy (daily) users in danger of suppressing their higher neuro-cognitive functions. It is not a question of access to MJ. Student users in a treatment program and researchers presenting at a recent conference made it clear that access to MJ in middle and high school was currently wide open.  In fact, remember that Dr. Grinspoon’s wife got marijuana for their son undergoing chemotherapy for cancer in his schoolyard in 1967! Medical marijuana dispensaries are NOT going to increase access to MJ for adolescents.

Spice is a vegetable product sprayed with synthetic marijuana, cannabinoids, that can be smoked or brewed as a tea. It is sold in convenience and incense stores with the label “not for human consumption” to avoid FDA regulations. The cannabinoids can have 50 to 100 more of an affinity for binding to marijuana sites in the brain than MJ itself. Its effects are similar to but can be much stronger than “smoking a joint”, and about 11% of high school seniors have tried “Spice”. Cannabinoids are easily manipulated synthetic chemicals so that simple chemical changes are made in manufacturing to skirt FDA regulations.

Bath Salts are completely useless for baths. It is a white crystal of chemicals (cathinones) that produce amphetamine effects when ingested, smoked, or snorted. Like Spice it carries the label “not for human consumption”. It was sold as an over the counter health supplement free of FDA regulations.  Both Spice and Bath Salts were first introduced in the U.K. and  Europe, and after much commercial success there they have come to the U.S. and Canada. Bath Salts were Federally banned in the U.S. in July 2012.

“Take home messages”:
1. Marijuana use before the age of 20 does have structural and functional effects on brain development, primarily but not limited to the frontal lobe. (“The frontal lobe, responsible for impulse control, is the last to develop and the first to go.”)

2. After the age of 20 there is little current evidence that MJ causes any permanent effect on brain function or structure.

3. There are  currently no predictors that will identify an occasional user of MJ as one who will become dependent or addicted to MJ (daily use), but the earlier one starts using marijuana (13 yo.) the more likely brain function will be effected.

4. Despite the “trustworthy karma” of medical marijuana, marijuana prescriptions will result in the dispensing of varied, complex, and inconsistent products.

5. Access to marijuana by middle and high school students in 2013 is now so easy according to both students and researchers  that medical marijuana dispensaries will provide little increased access to adolescents.

This entry was posted on Wednesday, May 15th, 2013 at 5:01 PM and is filed under current events, drugs, evidence-based medicine, Pediatrics. You can follow any responses to this entry through the RSS 2.0 feed. You can leave a response, or trackback from your own site.

One Response to Vol. 90 May 15, 2013 Medical Marijuana and Other Designer Drugs