Walk with a purpose?
I am anticipating the usual New Year’s Eve barrage of  advice about improving my health in the coming year. . . . especially about exercise. “If you can’t jog, then at least walk” is perennial advice directed at people my age. Well, this year even that gentle advice has gone up a notch. This year I should “walk with a purpose.” Gimme a break.

The Journal of Transport and Health published a study of “safe exercise” during the pandemic and found that people walking with a purpose (to the grocery store or to work) reported “significantly better health than people who were just out for a casual walk.” The data is from a 2017 (pre-pandemic) study.  The “positive health difference” between “walking with a purpose” and “casual, recreational walking” was 3-6%. I have previously warned about attaching much significance to results expressed in percentages, and this study is a prime example. It’s just another attempt to make me feel guilty about my lack of regular exercise.  Gimme a break.

Stop stressing about your kids and grandkids screen time?
Dr. Michael Rich, well-known “Mediatrician” at Boston Children’s Hospital, says that forbidden screen time is an outdated relic from the days when our parents had to pry us from Saturday morning cartoons (on TV for some of you or from the Pelham Picture House movie theater on Saturday mornings for really old people like me). “Video games are one of the best educational technologies. There are sets of conditions and rules and it punishes or rewards you for behavior. . . . Elements in the game are teaching stuff like inertia, movement, and motion. . . .  There’s physics to be learned here.” Maybe that is why I find it so hard to follow my grandkids’ game playing. After five minutes of trying to understand their game methods and actions, I usually shake my head, mutter “gimme a break”, and go do something else.

Dr. Rich recommends just the opposite; hang in there and play the game with the child. “It is better than negative finger-wagging. You’re coming as their student to them. Its great for kids to have that role reversal.” I agree, but I still say, gimme a break.

A vote in favor of  domestic violence?
GOP senators have stalled a vote renewing the 1994 Violence Against Women Act (initially sponsored by Senator Biden and reauthorized in 2000, 2005, and 2015) because it extends a ban on gun ownership to a “boyfriend” (aka “the boy friend loophole”) defined specifically as “dating partners” or “stalkers”,    The NRA opposes that “gun control” provision and about 18 Republican senators did too, so the re-authorization was blocked. Between 2016 and 2018 intimate partner violence has increased by nearly 50%.  When a gun is present during a domestic violence event the incidence of homicide is increased by 500% . (National Coalition Against Domestic Violence)  Give women a break.

A $10,000 bill for an out-of-network medical procedure?
A “ban” on sky-high surprise medical bills levied against patients for out-of-network services was included in the just-passed and Trump-signed pandemic relief bill (one of hundreds of inclusions in the relief bill that were distantly or not related at all to pandemic economic relief). Such billings can come from doctors, hospitals, and air ambulances. One example given was a surprise $10,000 bill to a patient from an anesthesiologist for uncovered emergency surgery from an insurance company’s “out-of-network” physician. No patient I know ever picks their anesthesiologist, much less knows to which insurer company network they belong. The law “does not set a reimbursement rate”, but “calls for the insuror and provider to go to arbitration to make a deal.”  Gimme a break.

Pennsylvania has the most expensive medical marijuana?
Cannabis is most often sold in eighths of an ounce; that much of a common type costs $35 in California, but $58 in Pennsylvania. In Colorado a full ounce of average weed costs the consumer $190. In Pennsylvania it could cost $500, or even $600. The reasons for this disparity in the 2 1/2 year old medical marijuana programs include Pennsylvania state law keeping the supply to a minimum, requiring it to be grown inside (much more expensive), requiring full-time guards of the crop, requiring two separate tests (one is usual) for mold contaminants, reluctance by the state agency to use its regulatory power to drive down prices, and good old-fashioned profiteering.  The Director of the Pennsylvania Office of Medical Marijuana, paid $133,00 a year, declined an interview in response to a media inquiry. In the meantime agency staff reported that $20 million in marijuana revenue has been recently transferred to that Pennsylvania’s general fund which “could have assisted lower-income marijuana customers.” Gimme a break.

Tattoos are considered “free speech”?
Several California tattoo parlor owners have just sued their governor to lift his corona virus mandated closure of tattoo parlors as a violation of their free speech. The suit is based on a ten year old ruling by the U.S. Circuit Court of Appeals that “a tattoo itself, the process of tattooing, and even the business of tattooing are  . . . purely expressive activity fully protected by the first amendment.” For public health purposes California considers tattoo parlors as personal care services like nail salons and barber shops and mandated their closures. Last week a ruling by a U.S. District court judge stated that “the states’s public health interest in containing the coronavirus trumps [sic] the parlors’ free speech interest.”

One parlor owner reported that there has been a steady stream of requests for pandemic-related tattoos such as “people’s faces with spiky hair and the year 2020” or “a customer sitting on a couch playing video games like he did all year”. Gimme a break. 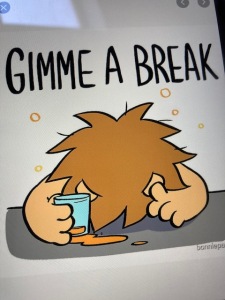 This entry was posted on Friday, January 1st, 2021 at 1:43 PM and is filed under coronavirus, current events, gun violence. You can follow any responses to this entry through the RSS 2.0 feed. You can leave a response, or trackback from your own site.