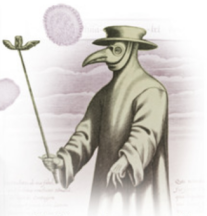 “Doctors during the 17th century plague epidemic wore masks to protect themselves from the bad odors and miasmas in the air that were thought to spread the infection.

Similar masks were encouraged to be worn by all persons during the Manchurian Plague outbreak of 1910-11.

During the 1918-19 influenza epidemic public health campaigns argued that “mask wearing was a public duty”. Mask “slackers” refused to wear masks as their “personal liberty right.” An anti-mask league was formed to raise money to resist enforcement of mask ordinances. Some violence occurred.

Research after the epidemic died down produced high speed photographs showing the masks effectiveness in blocking droplet ejection from a cough or sneeze.

In the 1960’s new synthetic material disposable masks became popular in hospitals and clinics. The routine of “use one-time and throw away” became the norm.

In 2003-2004 non-medical people in many countries, particularly East Asia, started wearing masks to protect themselves from the SARS severe respiratory disease epidemic. After the SARS epidemic subsided (on its own, for several debated, speculative reasons) Asian people continued to wear masks in subways and other crowded public spaces for self-protection from germs and allergens.

President George W. Bush, in response to concerns about new influenza epidemics, stockpiled 100 million N95 masks in 2006. When  a new influenza strain started a 2009 epidemic, the Obama administration distributed those masks to the general population. Neither Obama nor Trump administrations restocked them.

When Covid-19 struck in February and March of 2020 the limited number of masks available were distributed selectively to hospital sites, and general public use was not encouraged.

By the time mask supplies recovered and public health officials started encouraging widespread mask use, ‘the flip-flop fueled a resurgence of age-old resentment of mask mandates.’

Ongoing scientific debates about exactly who was being protected by masks (“self or others”), changing medical advice based on changing epidemiology data, and a heated presidential campaign quickly politicized the mask debates. Mask confrontations could become violent (“air rage”) as they did in 1918. (1) (3)”

“More than 1000 suits challenging current public health law have been filed against mask mandates and other Covid-19 mitigation measures. Courts have historically been deferential to health orders, especially during disease outbreaks, and have rejected most ‘freedom-of-speech’ and ‘right-to-travel’ challenges. However, since 2020 several state and federal courts have proved receptive to challenges to mandates relating to religious liberty [Why no in-church services or bible study groups of no more than three persons?] and the scope of executive authority [How can the CDC ban eviction of renters? How can OSHA issue and enforce employee mask mandates?].

Many states are enacting or considering legislation that would strip officials of current public health powers. Courts are rightly charged with rectifying executive abuses of authority and the disregard of individual rights. But in their zeal to protect religious liberty and constrain executive action, courts may be leaving officials with fewer tools to fight Covid-19 and the next pandemic.” (2)

This entry was posted on Thursday, September 30th, 2021 at 8:47 PM and is filed under coronavirus, current events, Infectious Disease, politics. You can follow any responses to this entry through the RSS 2.0 feed. You can leave a response, or trackback from your own site.