Gun violence injuries and deaths in the U.S. is a public health crisis.”   – AMA

Gun violence kills roughly 30,000 Americans each year, about as many people as car accidents. The federal government has been restricted in gathering and analyzing gun violence data since 1996 when a CDC study linked the presence of a gun in the house with an increased risk of homicide. The NRA responded with a successful lobbying effort to pass the restriction that the CDC may not use any money allocated to it for “activities that advocate or promote gun control.” It stripped $2.6 million from the CDC budget for firearm injury research. After the Newton School shooting in 2012 Obama issued an Executive Order (one of his relatively few) commanding the CDC to renew their research into gun violence and requested Congress to allocate $10 million for that. Congress never did, and research never resumed.

The NRA has also successfully limited the federal government’s ability to trace guns involved in crimes, “crime gun-tracing”. Some states have developed data bases of crime-gun tracing to identify sources of and reduce illegal gun trafficking. Massachusetts established crime-gun tracing in 2014, but has not published a meaningful analysis of the data which might lead to some action. The 2017 Massachusetts legislature has inserted into their budget proposal a request that the governor produce such an analytical report. 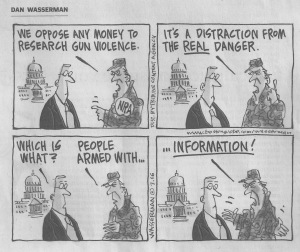 Doctors, particularly pediatricians, are keenly aware of the dangers of having guns in the  house. 90% of accidental gun injuries to children happen in a home with a gun. The American Academy of Pediatrics has explicitly recommended that pediatricians routinely ask gun-safety questions during health and wellness visits. But in 2011, Florida passed a “Privacy of Firearm Owners” law levying $10,000 fines and loss of medical license to any pediatrician that inquired about the presence of firearms in the house. The law was upheld by a Florida state court in 2014 based on “2nd Amendment infringement”. The law was just struck down this year by a Federal Appeals Court that ruled that “there was no evidence that the law infringed on the Second Amendment.” By the way, the Affordable Care Act (aka Obamacare… remember Obamacare?) specifically prohibits physicians from keeping records on gun ownership. an assurance to any paranoid, conspiracy-theory-believing gun owner that docs were now not in league with big government. (see “Docs vs. Glocks”, Scientific American, August 2015. pg. 10)

The truth is that “mass shootings”, though a big part of media attention, are a small part of the  30,000 annual gun death toll. 62% of  gun deaths are due to suicides committed with guns that DO NOT BELONG to the victim (particularly among the young). Criminals steal about 250,000 guns per year. 1.7 million children live in homes with unlocked, loaded firearms. (2)

The NRA consistently raises the spectrum of the need for the home owner to have a means of self-defense, but a gun is 22 times more likely to be used in a criminal assault, an accidental death or injury, a suicide attempt, or a homicide than it is for self-defense. 61% of gun homicides are by people who know each other.(3)

Making a gun as smart as an iPhone is one way to prevent to a large portion of gun injuries and deaths. Previous attempts to develop such a smart gun have been fraught with problems, have been actively boycotted by gun manufacturers, and have been opposed by gun advocates and the NRA. Kai Kloepfer, a 15-year-old high school student in Colorado, in response to the Aurora theater shooting near his home, started a science project in 2015  to design a pistol that will only fire when a sensor in the grip recognizes the fingerprint of the owner. His project won awards, and Kloepfer delayed his entrance to MIT for a year when he got a grant to develop a working model of such a smart gun. By 2017 he successfully built and demonstrated a smart pistol. The gun takes 1 second to unlock, its battery lasts a year, a light indicates the battery status, and a second light indicates it is unlocked and ready to fire. Neither a child nor a thief can fire the gun. The owner may store up to 10 “authorized user” fingerprints (like for a spouse or domestic partner ). The smart gun is smart enough to NOT  connect with the internet, so it can not be hacked or hijacked.

The NRA response has been predictable: “NRA does not oppose new technological developments in firearms; however, we are opposed to government mandates that require the use of expensive, unreliable features, such as grips that would read your fingerprints before the gun will fire.”(2)

Hey, at least the NRA didn’t evoke the 2nd Amendment argument. That is progress!  Technology can deal with “expensive” and “unreliable”. Technology is far faster to upgrade than the Constitution.

This entry was posted on Saturday, July 15th, 2017 at 9:03 AM and is filed under current events, evidence-based medicine, government, Pediatrics, politics. You can follow any responses to this entry through the RSS 2.0 feed. You can leave a response, or trackback from your own site.