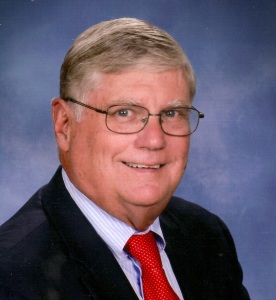 The remarkable facts, that the paroxysm, or indeed the disease itself, is excited more especially upon walking up hill, and after a meal; that thus excited, it is accompanied with a sensation, which threatens instant death if the motion is persisted in; and, that on stopping, the distress immediately abates, or altogether subsides; have . . . formed a constituent part of the character of Angina Pectoris. – “Remarks on Angina Pectoris” by John Warren, M.D., appeared in 1812 as the first article in the first issue of The New England Journal of Medicine and Surgery.

About this time of year in 1958 my father had a heart attack in Toronto.
He awoke in the morning with some chest pain that didn’t get better after a cold, brisk shower “to make it subside” (“De’Nile ain’t just a river in Egypt”).Then he walked up a flight of stairs to a physician’s office (more water down De’Nile), almost left the waiting room when the pain went away (ditto again), but immediately impressed the doctor with how pale and clammy he looked. He spent three (3) weeks on his back in a Toronto hospital bed with the diagnosis of “heart attack.:” He was allowed to return home to suburban New York City by train. I don’t remember why the train, but I think it had something to do with him traveling in a wheelchair (“activity still restricted”).

Things sure have changed. (NEJM 376:21 May 25, 2017)
The rate of hospitalization in the U.S.for a heart attack (acute myocardial infarction or AMI) has decreased by 5% PER YEAR since 1987. The rates of major complications have dramatically decreased during the same period. Deaths from acute MI have declined slowly since 1980, but 50% of the AMI deaths occur before the patient arrives at the hospital. Hence the push in recent years to teach CPR to everyone and distribute portable cardiac defibrillators/ automatic external defribillators (AED) as widely as possible.

There are now at least six types of heart attack.
The big divide is between those patients that have a specific change in their EKG, an elevation of the ST segment (STEMI) and those that do not (non-STEMI). STEMI implies significantly more heart damage and is treated more aggressively. Branching down off of these two big categories are 5 other distinct types of MI based on modern diagnostic modalities, both EKG findings and blood sample biomarkers, and therapies. I won’t bore you with all those details. Just remember that a “heart attack” is not just a “heart attack” anymore. It all depends…

There is distinctly different therapy for each type of AMI.
Today there is a lot more than “bedrest for three weeks.” Each AMI type has a best practice timeline which varies considerably, except that everyone arriving in the ER with chest pain gets an aspirin within 5 minutes (makes platelets “slippery” to reduce clotting of blood in small coronary arteries). After that: 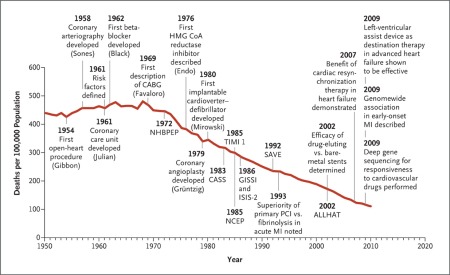 Decline of cardiovascular deaths due to scientific advances.
(NEJM 366:1, January 5, 2012) 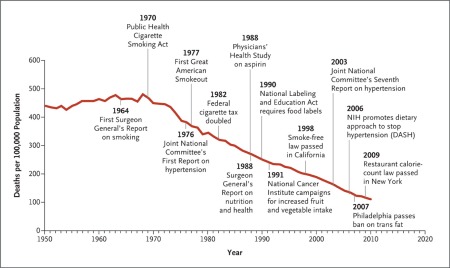 Numerous studies have shown that the biggest influence on your chance of having a heart attack is genetics; what you inherit from your parents. The good news is that if you have NOT picked your parents well, life style changes like no smoking, exercise, no obesity, and a healthy diet can reduce even the high risk for coronary disease by nearly 50%. (NEJM 375:24 December 15, 2016)