A recent visit to Greek/Roman ruins ringing the Eastern Mediterranean Sea reminded me again about how much has changed, and how nothing has changed.

Every guide in Pompei takes their group to see the brothel. On its walls are the best preserved and most colorfully restored frescoes in this Roman town buried under 30 feet of Mt. Vesuvius’s volcano ash in 79 AD. Since most Pompei residents, and certainly the visiting sailors and merchants, could not read nor write, the services offered were depicted by pictures. The picture of each sexual position was marked with its relative price; one, two, or three hash marks. The route to the brothel in this city of crisscrossing streets was clearly marked by a street stone carved with  a graphic phallus and scrotum and a left-pointing arrow showing the way.

At Ephesus, a Roman city in Turkey that rivaled the size of Rome in 100 AD, there are no restored brothel walls. Its most striking restoration is the facade of the Celsus Library, one of the largest if not the largest library of its era. Every guide there gleefully points out the secret tunnel that led from the library to the brothel.  A stone block carved with a single serpent entwined around a winged staff, the sign of a physician(1), rests on the approach to the Celsus Library facade. ( 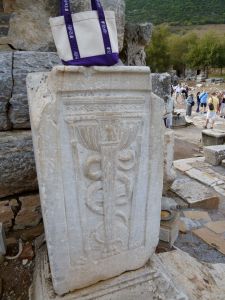 That’s a traveling bag from the Duffy Health Center for the Homeless perched on top of the stone.)

In both Pompei and Ephesus one of the temples was used as the gathering place for ill people to be ministered to by special priests. The “admitting process” to these “hospitals” started with an examination of the patient to determine how near death he or she might be. The priests were quite protective of their hospital’s reputation and did not want it to be known as “the place to go to die.” If a patient was considered near death or even with a questionable chance for cure, the patient was instructed to go back home, pray to the Gods for relief, and return in a few days. 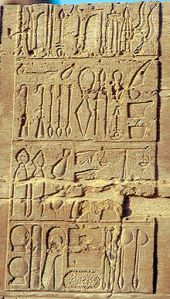 This triage process is strikingly similar to the one described to us by the guide at the temple of Amenhotep, Egypt, which we visited on a previous trip. Hippocrates (the “father of medicine”) and later Galen studied at the temple of Amenhotep, and acknowledged the contribution of ancient Egyptian medicine to Greek medicine. The earliest known surgery was performed in Egypt around 2750 BC. The wall hieroglyphics there documented all kinds of easily recognized forceps, cutting tools, clamps, and other surgical instruments.The floor carvings and pictographs in this temple were less formal, but still understandable, and are thought to be the work of “patients” waiting in the gallery to be admitted or to be sent home after “triage” by their priests.

So, generals still fall because of beautiful women, hospitals still worry about their mortality rates, and “how best to die” is still a public issue for discussion, BUT now-a-days the hieroglyphics are electronic (2).

References:
1. The caduceus with TWO serpents entwined around a winged staff, now considered the physicians’ sign,  was actually the sign for merchants, commerce, and the god Mercury.
2. The Telegraph (UK) reported that the FBI had 20,000 – 30,000 pages of communication, mostly emails, between General Allen and Ms. Kelly.